You are here: Home

Jagjivan Ram (5 April 1908 – 6 July 1986), known popularly as Babuji, was an Indian independence activist and politician from Bihar. He belonged to theDusadh caste and was a leader of the Dalit (Untouchable) community. He was instrumental in foundation of the All-India Depressed Classes League, an organisation dedicated to attaining equality for untouchables, in 1935 and was elected to Bihar Legislative Assembly in 1937, that is when he organised, rural labour movement.

Why do we choose to forget our past? 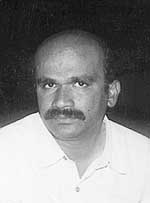 Is there a single village in India which has no Dalit? There could be a few exceptions but we do find Dalits in most parts of India - who have fought the system relentlessly. Every village has produced its very own Dalit social revolutionary but is there any Dalit reformer with a pan-Indian identity? And how exactly does one acquire a pan-Indian identity? Does one go around the country reforming society or can one confine oneself to a particular area and still acquire a pan-Indian identity. And does one become a national icon either of these ways. What matters most is how mainstream media and academics project a reformer.

Amongst non-Dalits, we have icons in every field. But from amongst the Dalits, barring Dr Ambedkar, it is difficult to think of even one reformer who is famous all over India - even though reformers from within Dalit communities may far outnumber reformers from non-Dalit societies. Dalits don't own any part of the media, they don't own academic institutions, they're not part of the English educational setup and, therefore, they are unable to push forward their own icons. Thus, most Dalit icons remain local phenomenon - a Telugu or Tamil reformer remains a Telugu or Tamil legend forever. The same goes with the Hindi heartland.

The hostile attitude of mainstream society can best be illustrated by citing the great Dalit social reformer and teacher Bhagyareddy Varma's case. He was born on May 22, 1888, and named Bhagaiah. The family guru, a learned man belonging to the Shiva Cult, visited the untouchable family in November that year and renamed the child Bhagyareddy. The father, Maadari Venkaiah, asked why. The Guru argued that the so-called untouchables had been rulers prior to the Aryan expansion towards the South - hence the term "Reddy," from the Telugu word "redu", which means "ruler."

The child's first act of revolution came when he entered the world of education. His illiterate parents fought off poverty, their social stigma and economic blockades to educate their child. The young child became a vehicle of change at the then Hyderabad Estate. In 1910, at the age of 22, Bhagyareddy opened a lower primary school for untouchables at Islamia Bazar in Hyderabad! And isn't it exceptional that at the young age of 18, Bhagyareddy had set up a social organisation which later came to be known as Manya Sangham, and finally evolved into the mass Adi-Hindu movement in 1917.

The Adi-Hindu movement posed a moral question before Hindu society: "That we (Dalits), too, are Hindus. The most original ones and, therefore, the practice of untouchability should be ended." Today's new Dalits may find it bizarre that one of their greatest heroes was arguing an incorrect hypothesis, but remember the times he lived in! Swamy Achhutanand, the great Dalit reformer, too, had called the Dalits Adi-Hindu, and both were around at about the same time. Dr Ambedkar had lauded the work of Swamy Achhutanand. Obviously, Bhagyareddy adopted methods similar to that of the European reformers who, during the reformation phase, which led to the Great French Revolution of 1789, fought the authority of the Church by claiming to be hard-core followers of Christ! In that phase of European history, it was impossible to oppose the Church by declaring oneself an atheist.

By 1933, the number of schools run by Bhagyareddy rose to 26. In 1917, he presided over the Andhra Desha First Panchama Conference at Bezaiwada. His popularity reached leaps and bounds, so much so that the IX Conference of Depressed Classes, held at Lucknow on September 27, 1931, was presided over by him while Dr Ambedkar was chief guest. In 1917, at a conference on All India Hindu Reform in Calcutta, Bhagyareddy was one of the speakers. After he finished his speech within the stipulated ten minutes, the public demanded more from him and his time at the podium was extended. Gandhiji was also present at the occasion and accorded him great respect. So popular had he become, that the Arya Samaj in 1913 organised a function to accord him the title "Varma".

Sri Rai C Bal Mukund, a Kshatriya and a retired judge of the Hyderabad High Court, died in 1926. In his will he had stated that his dead body be handed over to Varma's organisation, which would perform the last rites. His funeral procession was an exceptional occasion where, under the leadership of an untouchable, the elite of Hyderabad participated.

Bhagyareddy had launched a movement against devadasi pratha, forcing the Nizam to declare it a crime. His mission didn't confine itself to Andhra and he travelled all over India. Such a towering Dalit reformer, who was lauded by Dr Ambedkar, Gandhiji and Sarojani Naidu, and yet, our school books do not remember him as a reformer or a teacher.

Erode Venkata Ramasamy (17 September 1879 – 24 December 1973), affectionately called by his followers as Periyar, Thanthai Periyar or E. V. R., was a social activist, politician and businessman, who started the Self-Respect Movement or the Dravidian Movement and proposed the creation of an independent state called Dravida Nadu, comprising the states of South India. He is also the founder of political party, Dravidar Kazhagam.

Mayawati (Hindi: मायावती) (full name: Mayawati Kumari, born 15 January 1956), is an Indian politician who served four terms as Chief Minister of Uttar Pradesh (UP) as head of the Bahujan Samaj Party(BSP), which focuses on a platform of social change to improve the welfare of the weakest strata of Indian society—the Bahujans or Dalits, Other Backward Classes, and religious minorities. She was Chief Minister briefly in 1995 and again in 1997, then from 2002 to 2003 and from 2007 to 2012.

Meira Kumar (Hindi: मीरा कुमार) is an Indian politician and a five time Member of Parliament. She was elected unopposed as the first woman Speaker of Lok Sabha and served from 2009 to 2014.

She is a lawyer and a former diplomat. Prior to being a member of the 15th Lok Sabha, she has been elected earlier to the 8th, 11th, 12th and 14th Lok Sabha. She served as a Cabinet Minister in the Ministry of Social Justice and Empowerment of Manmohan Singh's Congress led Government (2004–2009).

We have 108 guests and no members online

Event: The Untouchability (offences) Bill was introduced in the Parliament by the Nehru Government.